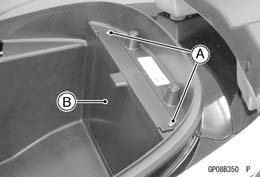 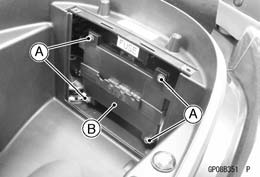 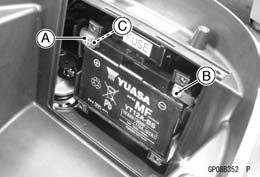 NOTICE Be sure to disconnect the negative (-) cable first 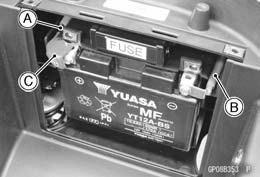 NOTICE If each battery cable is not correctly disconnected or connected, sparks can arise at electrical connections, causing damage to electrical and DFI parts. 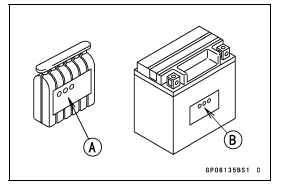 NOTICE Each battery comes with its own specific electrolyte container; using the wrong container may overfill the battery with incorrect electrolyte, which can shorten battery life and deteriorate battery performance.

NOTICE Do not remove the aluminum sealing sheet [A] from the filler ports [B] until just prior to use. Be sure to use the dedicated electrolyte container for correct electrolyte volume.

DANGER Sulfuric acid in battery electrolyte can cause severe burns. To prevent burns, wear protective clothing and safety glasses when handling electrolyte. If the electrolyte comes in contact with your skin or eyes, wash the area with liberal amounts of water and seek medical attention for more severe burns. 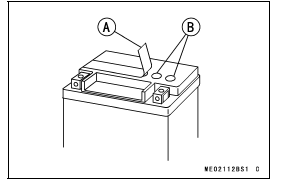 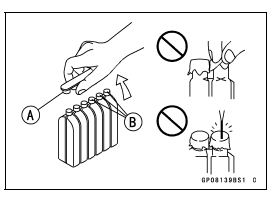 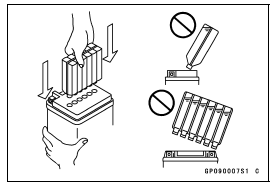 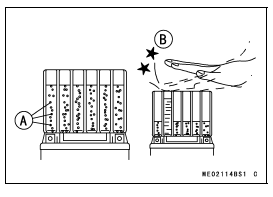 NOTICE Removal of the container before it is completely empty can shorten the service life of the battery.

Do not remove the container until it is completely empty. 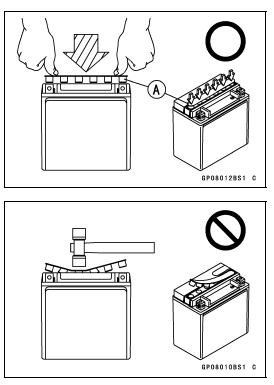 NOTICE Once the strip of caps is installed onto the battery, never remove the caps, nor add water or electrolyte to the battery.

If the above chargers are not available, use equivalent one.

1) No need of topping-up

No topping-up is necessary in this battery until it ends its life under normal use. Forcibly prying off the seal cap to add water is very dangerous. Never do that.

If an engine will not start, a horn sounds weak, or lamps are dim, it indicates the battery has been discharged. Give refresh charge for 5 to 10 hours with charge current shown in the specification (see Refreshing Charge).

When a fast charge is inevitably required, do it following precisely the maximum charge current and time conditions indicated on the battery.

NOTICE This battery is designed to sustain no unusual deterioration if refresh-charged according to the method specified above. However, the battery's performance may be reduced noticeably if charged under conditions other than given above. Never remove the seal cap during refresh charge. If by chance an excessive amount of gas is generated due to overcharging, the relief valve releases the gas to keep the battery normal.

3) When you do not use the motorcycle for months.

Give a refresh charge before you store the motorcycle and store it with the negative cable removed.

Give a refresh charge once a month during storage.

If the battery will not start the engine even after several refresh charges, the battery has exceeded its useful life. Replace it (Provided, however, the vehicle's starting system has no problem).

DANGER Batteries produce an explosive gas mixture of hydrogen and oxygen that can cause serious injury and burns if ignited. Keep the battery away from sparks and open flames during charging. When using a battery charger, connect the battery to the charger before turning on the charger. This procedure prevents sparks at the battery terminals which could ignite any battery gases. The electrolyte contains sulfuric acid. Be careful not to have it touch your skin or eyes. If touched, wash it off with liberal amount of water and seek medial attention for more severe burns.

Be careful, if a sealed battery is installed on a motorcycle which had an ordinary battery as original equipment, the sealed battery's life will be shortened. 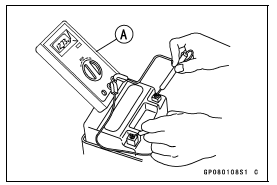 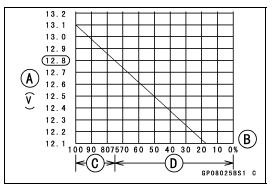 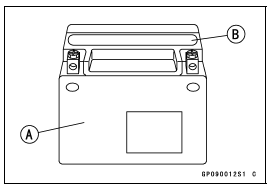 WARNING This battery is sealed type. Never remove sealing cap [B] even at charging. Never add water. Charge with current and time as stated below. 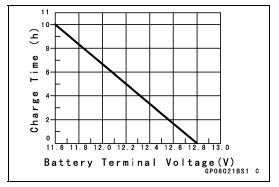 NOTICE If possible, do not quick charge. If quick charge is done unavoidably, do standard charge later on. 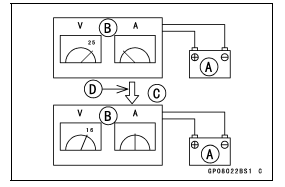