Your KYMCO scooter is equipped with a maintenance-free (sealed) type battery so it is not necessary to check the battery's electrolyte level or add distilled water.

NOTE: If your battery seems weak and/or is leaking electrolyte (causing hard starting or other electrical troubles), contact your KYMCO dealer immediately .

Your battery is a maintenance-free type and can be permanently damaged if the cap strip is removed.

Your scooter's battery gives off explosive hydrogen gas during normal operation. A spark or flame can cause the battery to explode with enough force to kill or seriously hurt you. Wear protective clothing and a face shield, or have a qualified technician perform the battery maintenance.

NOTE: Always keep ignition switch OFF when servicing the battery. 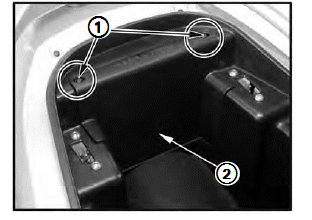 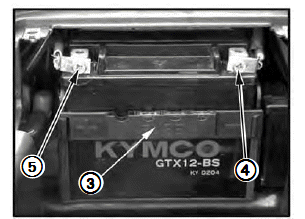 Install in the reverse order of the battery removal: Connect the positive lead (+) first, then the negative lead (-).

When frequent fuse failures occur, it usually indicates a short circuit or an overload in the electrical system.

Never use a fuse with a different rating from that specified.

Serious damage to the electrical system or a fire may result, causing a dangerous loss of lights or engine power.

The fuse box 6 is located to left side of the battery in the battery box. The fuses 7 in the box are rated at 10A and 15A. 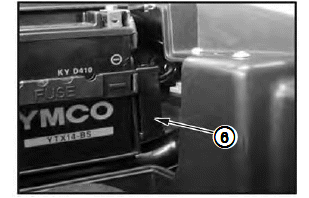 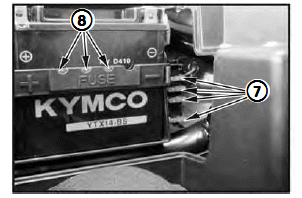 4. Pull out the failed fuse and install a new fuse.

Spare fuses 8 are located in the battery retainer.

NOTE: The charge fuse (and its spare) are rated at 30A

To replace the charge fuse: 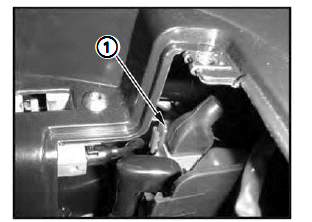 3. Disconnect the wire connector 1 of the relay. 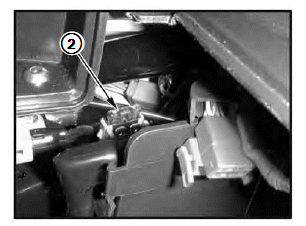 4. Pull out the old fuse 2 and install a new fuse. The spare fuse is located in the battery retainer.

The reserve tank is under left floorboard. Check the coolant level through the inspection window 1 at the left side skirt while the engine is at the normal operating temperature, with the scooter in an upright position.

Failure to follow these warnings may result in an accident due to tire failure. The tires on your scooter are a crucial link between your scooter and the road. You and your passenger's personal safety are dependant upon the condition of your scooter's tires.