This is a three-position, key-operated switch.

The key can be removed when it is in the 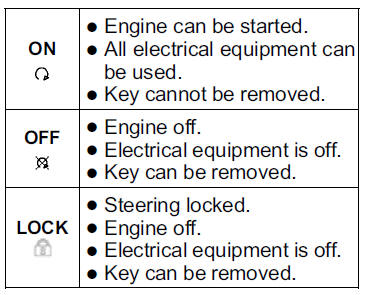 1. Turn the handlebars fully to the left.

2. Push the key down in the

position and turn it to

Turning the ignition switch to the

To shut the security shutter:

To open the security shutter:

To unlock the seat:

To lock the seat:

Refer to the Starting the Engine section in the HOW TO RIDE THE MOTORCYCLE chapter for starting instructions.

To stop the engine in an emergency, move the engine stop switch to the

Ordinarily, the engine stop switch must be in the

position for the motorcycle to operate.

Push in the hazard switch with the ignition switch in the

High or low beam can be selected with the dimmer switch.

When the turn signal switch is turned to the left (

) the corresponding turn signal lights and turn signal indicator blinks. To cancel the turn signal, push the switch in.

When the horn button is pushed, the horn sounds.

The high beam turns on only while the passing button is pushed.

While pushing the brake lever forward, rotate the adjuster and choose a suitable lever position from the four positions.

The electrical accessory 12 volt connectors are located in the glove box.

An accessory may be connected to its connector.

Mobile phone charge only. Use other appliance may cause damage.

WARNING Gasoline is extremely flammable and can be explosive under certain conditions, creating the potential for serious burns. Turn the ignition switch off.